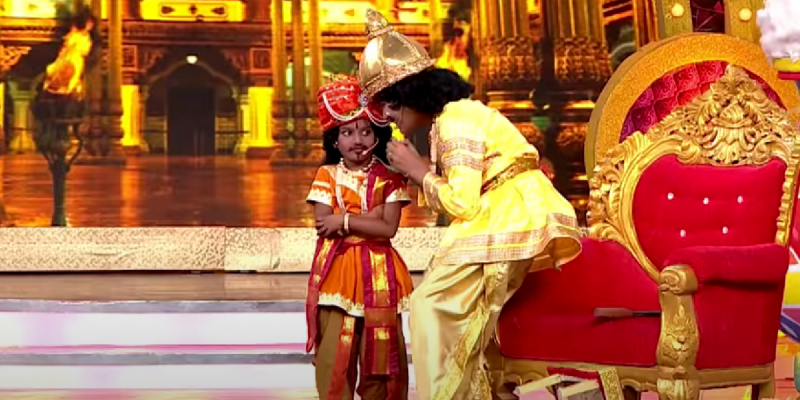 The BJP of Tamil Nadu has questioned a recently aired episode of the reality show ‘Junior Super Stars Season 4’, which aired on Zee Tamil, alleging that two child contestants performed a skit intended to poke fun at the Prime Minister Narendra Modi. In a letter to Zee Tamil, CTR Nirmal Kumar, State Chairman of the BJP’s IT and Social Media Cell in Tamil Nadu, wrote to the channel asking it to withdraw the show, alleging that “odious” comments had been made against the Prime Minister.

The skit aired on January 15 and in the episode, two children dressed as a king and a minister from a popular Tamil historical political satire film, Imsai Arasan 11 p.m. Pulikesi, are seen mocking the ruler of a country named ‘Sindhiya’. In the film, Tamil comedy actor Vadivelu plays the role of a king, who is controlled by the British and portrayed as conceited, dimwitted and who puts people in jail as he pleases. The king of the film also lives extravagantly, even when there is poverty and famine in the land.

In the skit broadcast on Zee Tamil, the children seem to tell the story of this king who tried to demonetize the currency with the aim of eradicating black money, but failed.

In said sketch, the child dressed as a king wonders what is holding back the growth of his country. He then concludes that it is black money and says that if all the money is demonetized, then the black money will be eradicated. The other child, disguised as a minister, replies that a similar incident took place in a country called Sindhiya (an invented kingdom), where “that king also did the same as you, like a fool”.

Continuing the conversation, they go on to say that instead of eradicating black money, the “king” just wears different colored jackets and walks around. The children are also seen mocking the king’s divestment agenda and rule in the nation, to which the judges and others in the audience applaud.

The “king” then asks his minister if they should go in disguise to the south of the kingdom. People will remember that Vadivelu’s character Imsai Arasan from the film often dressed up to hear what people were saying about him. In the sketch, the child who plays the role of the minister replies: “People over there don’t even pay attention to us when we go dressed like us.”

However, the BJP alleged that the show was “mocking” the prime minister by referring to the 2016 demonetization exercise through the role of the fictional king.

Kumar, in his letter to Chief Cluster Officer of Zee Enterprises Limited Siju Prabhakaran, said the children, aged around 10, were “deliberately” asked to make the comments against the Prime Minister.

“Scathing remarks were made about demonetization, his diplomatic trips to various countries, the Prime Minister’s attire and his divestment. For a child under ten, it would have been impossible to understand what this really means. But, under the name of comedy, these subjects have been forced upon children,” Kumar said in the letter.

He also accused the channel of failing to take action to end the “blatant misinformation” being spread against the prime minister.

“It is evident that the channel has made no effort to curb this blatant disinformation being casually transmitted and that too by young children. In an effort to outrun their fellow participants, these children simply do as they are told. what was said is beyond their reasonable understanding and the guardians of these minors and the channel must be held legally and morally responsible for this act,” Kumar wrote.

“Throughout this two-minute performance by two children, the judges, presenters and mentor were seen applauding without any inhibitions. However, when members of our group contacted them, they said that was not their reaction to the performance and that they were shocked by the editing. They claimed that their reactions at other times have been edited and added here. It was done intentionally, either for publicity or for a political agenda,” Kumar said, addressing the news minute.

He also added that after his letter, the channel promised to remove the affected part from its website and will refrain from rebroadcasting it.

It is not the first time that the BJP or other members of the right-wing group have been unhappy with the school children’s programs. In January 2021, as the country was debating the Citizenship Amendment Act (CAA), a play was staged at Shaheen Primary and Secondary School in Bidar district of Karnataka criticizing the CAA . Based on a complaint from a right-wing activist, a sedition complaint was filed against the school and the parents of the children who participated in the play. The students were interrogated several times and the director of the primary section of the school, as well as the mother of a child who took part in the play, were arrested. The school administration faced sedition charges for allowing the play to be performed.

The arrested duo remained in jail for two weeks as police actively pursued sedition charges, until February 14, 2020, when the district court granted them bail saying there was no evidence that the offense of sedition had been committed. Later, in August last year, police agreed they were acting against the rules by questioning children in uniform with weapons. No indictment has been filed in the case.

This article was first published on News item.